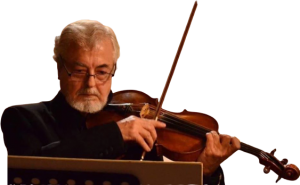 After graduating from Ankara University State Conservatory in 1961, he joined the Presidential Symphony Orchestra as a solo viola artist. During this task Walton, Hindemith, viola concertos by composers such as Bartok has sung for the first time in Turkey. He went to England in 1963 with a scholarship from the British Council and studied with F. Riddle at the British Royal College of Music. He went to America between 1966 and 1967 and worked here with W. Primrose. He settled in England in 1970. The artist, who became the first viola of the London Philharmonic Orchestra in 1979, passed the BBC Symphony Orchestra in 1989 as the first viola and retired from the same institution in 2000. Güneş, who has been playing in London Quartet for 15 years, was included in the records of C. Franck Piano Quintet, Mahler Piano quartet, which they performed with İdil Biret. Along with guitarist John Williams, he recorded the L. Boccherini Quintet. Saygun Viola Concerto, Hindemith Mourning Music, Telemann Viola Concerto, Viola and Poetry, Turkish Composers and Viola, Mozart Symphonia Concertante and Mozart Violin – Viola Duets recorded with Suna Kan, are among the CDs he recorded. In 1998, he was given the title of State Artist by the Ministry of Culture. He worked as a lecturer in the professor at Izmir Yasar University and Mimar Sinan Fine Arts University. On May 29, 2020, he left an irreplaceable gap behind him and died in London.